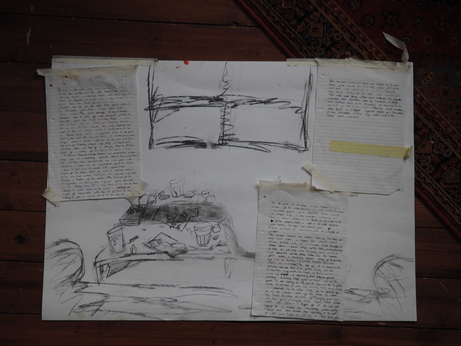 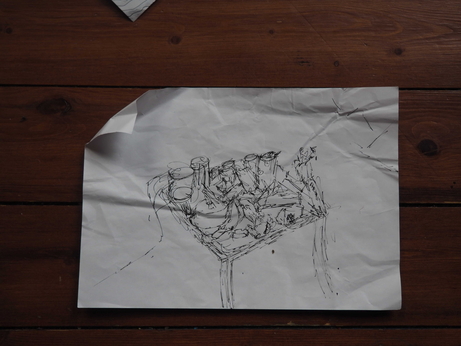 I am in the flats living room, sat on the sofa facing the window with the door behind me. In front of me sits a wooden table with four legs, the table is square in shape and a few inches higher than the sofa I am sat on.

Closest to me on the left side of the table is a tenants glass filled about four fifths with water. The glass belongs to my flatmate Dunstan and is one of two tenants glasses he brought with him from Orkney. About an inch and a half to its right and slightly closer to me is Maddie mouth to lung vaporiser. We went to buy it around march in lockdown. It has a square base with a cylinder sat on top of it holding the coil. On top of this is increasingly small rings with a smaller cylinder sat on top for breathing out of. Directly right of this a book and ashtray rest on top of a drawing Charlie did last night of a bottle of Buckfast. The book titled “The Bibelot: Brown’s Religion Medici” was purchased a few days ago at a bookshop opposite Maia’s tenement flat. The ashtray was bought for me last year and contains a dozen or so cigarette ends. The books cover is red and its pages are gold lined.

Right of the paper rests my willow charcoal which I broke into two pieces sitting on it moments ago after finishing a sketch of the table. The smaller of the two pieces is resting on a panel glass of water I am drinking from. It is also four fifths full or there about. A lighter next to the glass is resting on a pot of Indian ink. With the lid of that I am dipping the pen in as my nib starts to dry up. The lid rests on the edge in the closest right corner of the table. Behind it lies some packaged cigarette papers and Charlie’s matcha cup. It is shaped like a fat wooden lightbulb and has a metal straw in it. Back on the right side of the paper rests a USB-C to USB converter just behind the vape and tenants glass.

A small rectangle of cardboard rests on a length of carpet. The carpet covers the middle third of the table and was cut from a bigger bit Charlie and I found outside on of Glasgows Sikh temples, It droops down each edge of the table, barely touching the floor on one side and slumping down on the floor boards on the other side. In the centre of it rests a relatively recent copy of the Private Eye with the headline “SUMMER HOLIDAY SPECIAL: CARRY ON CAMPING.” The top of it is covered with circular gauzes that Kier gifted to us, an old Marcovitch cigarette tin bought at Barras market and on the right a relatively full tobacco pouch warning “Smoking clogs your arteries.” Half of the pouch is not resting on the Private Eye, but on the yellow Fabrino A5 notebook I use for writing notes during lectures and tutorials. On the other side of the Private Eye at the centre left of the table is a book by David Shrigley. A tube if red acrylic paint rests on top of it making the title read “WEA SSAGES CREA AD SITUA S.” Right of it and just behind is a mason jar containing green matter.

Charlie has now moved the ashtray to the left of the jar. Right of it is a blue panel glass that has been in the flat since we moved in. I don’t know who owns it. Charlie’s red A5 Fabrino notebook lies next to it slightly open. The last few items on the table are: a wine glass that also was here when we moved in, my tape measure that dunstan used to measure the space for a bedside table he is thinking of buying. On the far side of the table where Charlie and Maia are sat a clipper lighter rests on the wood. A few crumpled Rizla lay inside the tables four corners 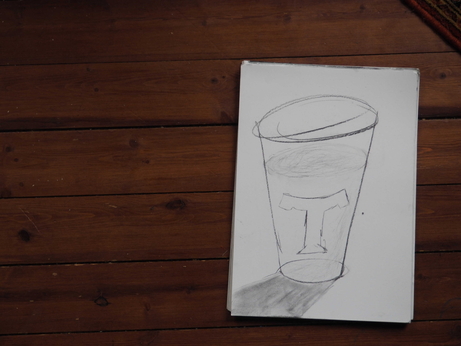 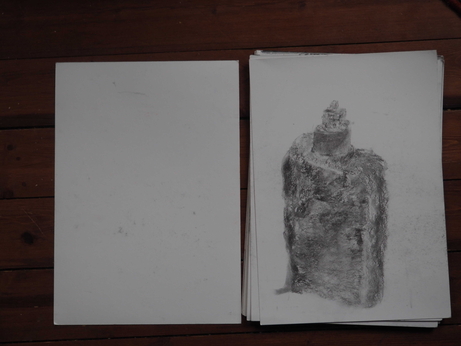 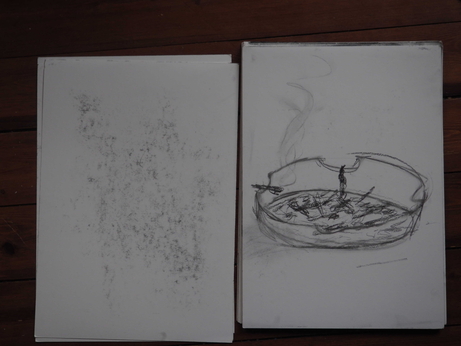 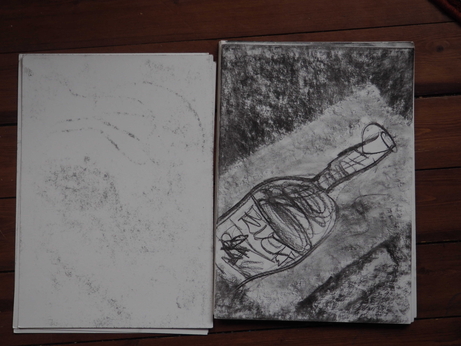 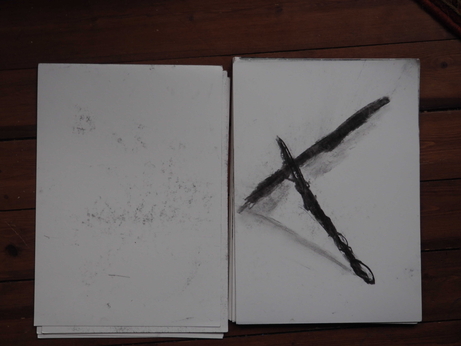 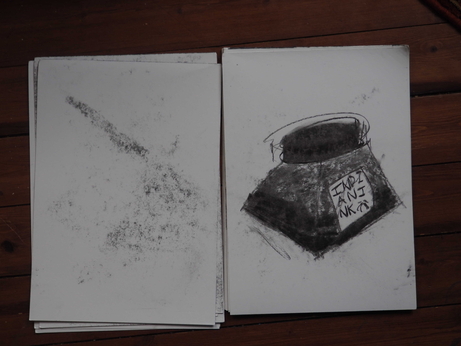 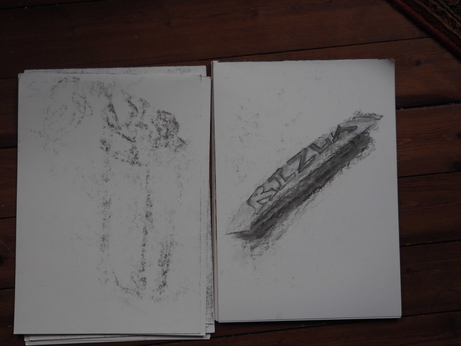 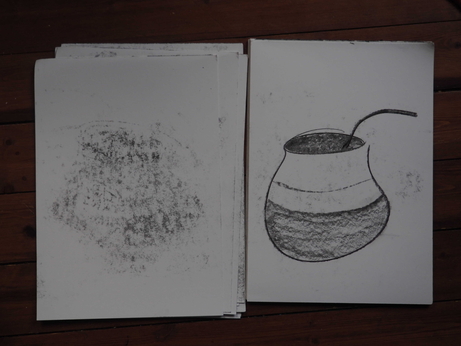 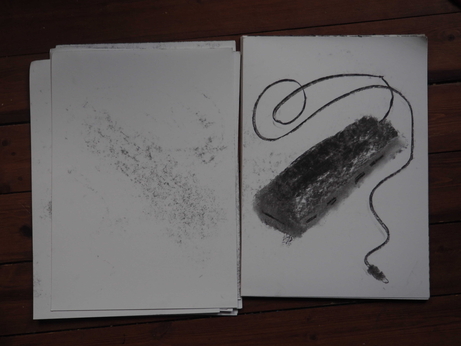 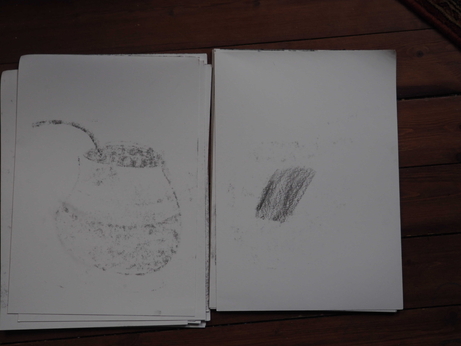 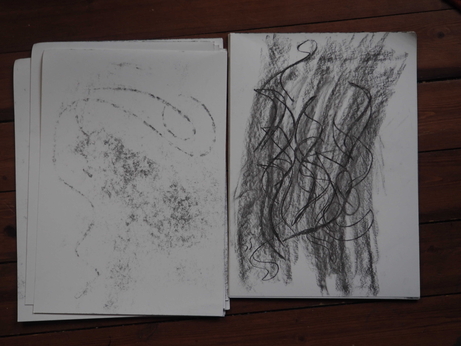 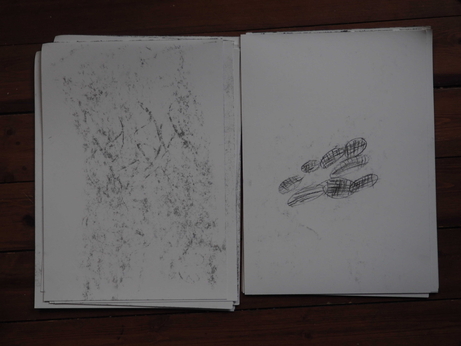 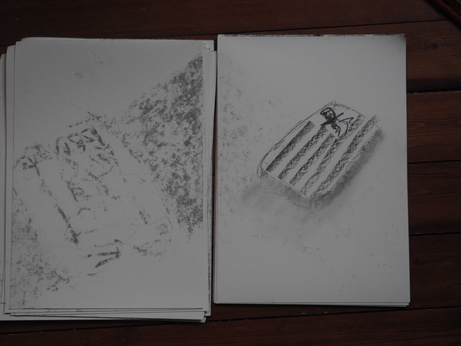 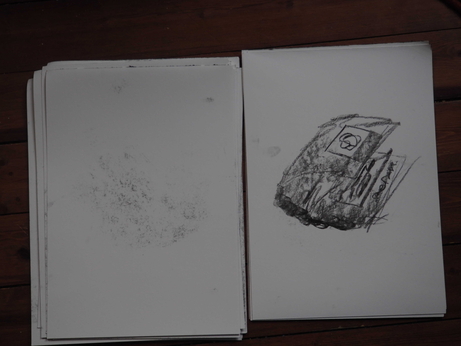 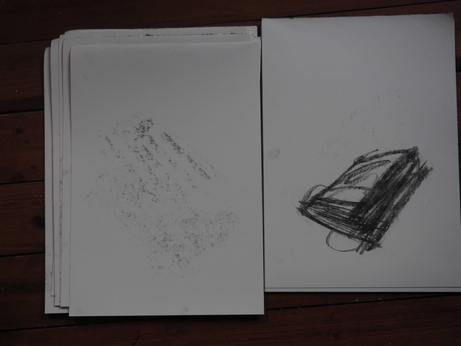 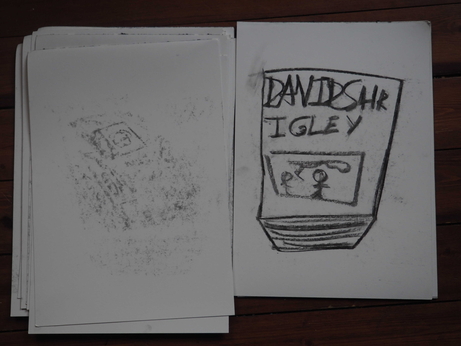 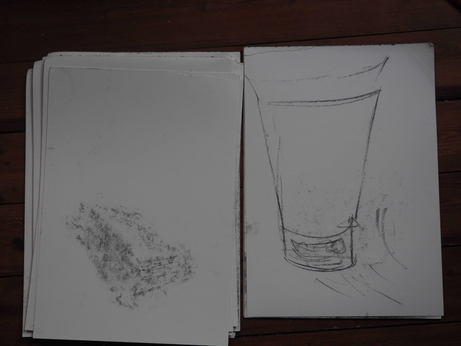 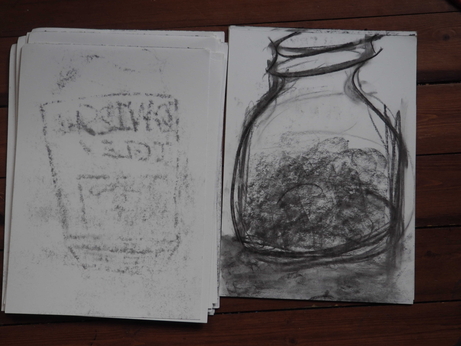 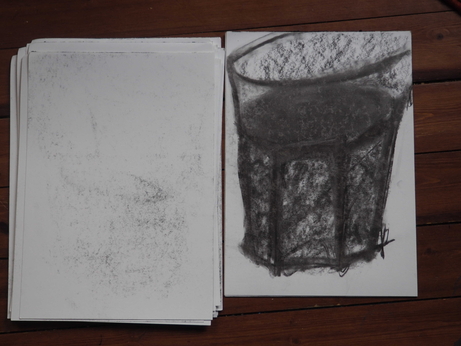 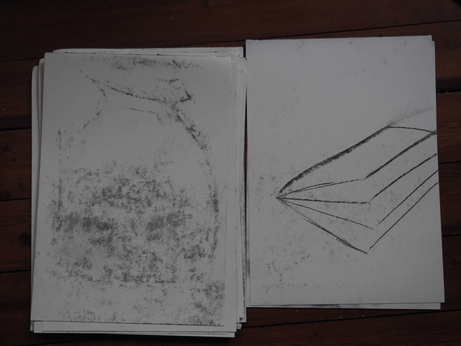 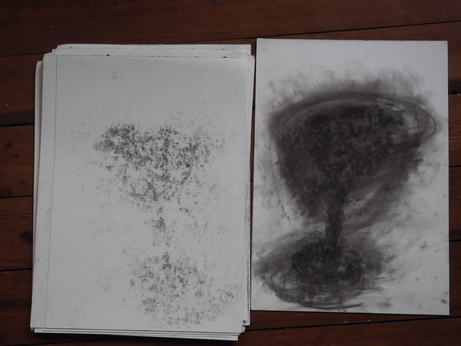 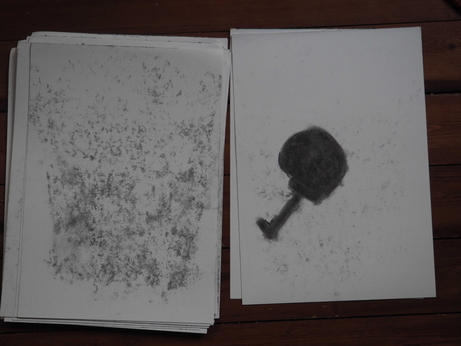 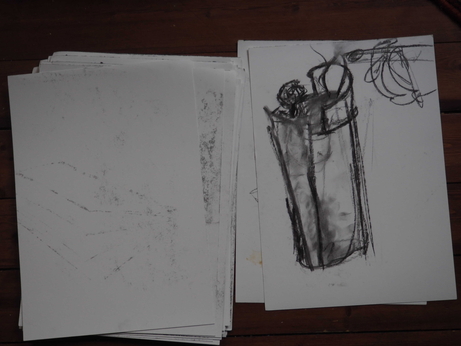 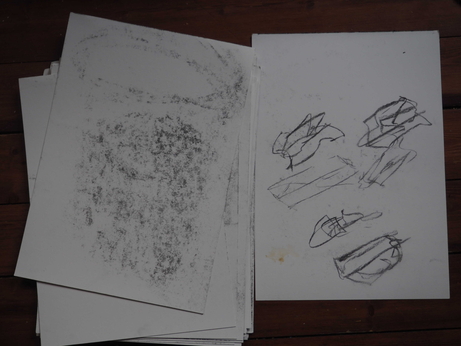 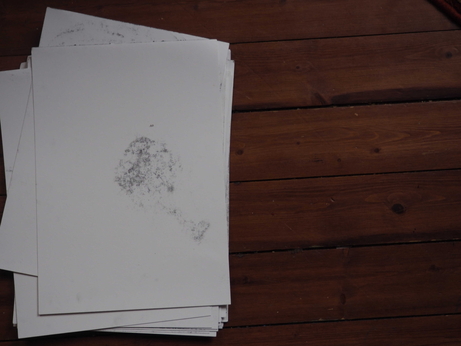 Sat at the far end of the hallway, directly right of me is the door to the living room, behind is the open door to Dunstan’s room. The light from his window illuminating the hall almost as much as the ceiling lights and casting my shadow on this page. Just behind and left of me the hallway turns into the kitchen.

Sat crosslegged on the chipped and stained floorboards looking down at this page the intricate patterns of our rug fill my view. Flowers flowing into other flowers, green leaves, ochre petals and a deep red-brown background. We found this length of carpet outside a Sikh temple and cut it to fill the hallway with a floorboards width either side of it. It stretches almost to the length of the left wall. Closet to me on top of the makeshift rug sits a Barcelona ’92 Olympics mugfuls of tea on the right. On my left sits my Indian ink and the jars lid.

Two bikes sit at the end of the hallway. Charlies mid 2000’s Dawes Galaxy touring bike sits on the right, its front wheel turned to the left 90 degrees and sitting on the floorboards. His back wheel sits on the carpet and is leaning right slightly towards the wall. A red reflector sits above the wheel snug between his two black panniers. They rest on his backpack with a reflective strip near the bottom of them. I imagine they contain things he is yet to remove from them since his camping trop to loch Lomond a day or two ago. With my head to the floor I can see a brown coffee cup in his bottle holder, it’s from his train journey back. Across from his grey framed bike is my 90s Marin Eldridge Grade. It sits slightly further back, its front wheel sat on the rug but turned slightly (maybe 55 degrees) to the right. The bikes saddle leans on the utility cupboards door and its handlebars just in front. Its frame is black in its front triangle with its name written on its top tube, its brand on the bottom. The handle bar stem, front fork, back fork, bottom bracket and those two bars that connect the bottom bracket and rear forks are the same red as the writing. I was gifted the bike before moving to Glasgow as a city with this many hills requires a bike with gears. I have replaced its mountain bike tyres with slim puncture resistant ones for city use. I have also added a back rack. In spite of the puncture resistant tyres I recently suffered a puncture in the back wheel and had to purchase a replacement inner tube. Charlie has now moved an empty bottle of wine and a box with his die to the carpet outside his door for unknown reasons.

The left wall of the hallway is a plain white with scratches covering its bottom half along its distance. It also holds the doors to the bathroom, Utility closet and beyond view where it turns to the left at the end, my bedroom.

The right wall is much more peculiar in nature. At first glance it is covered with a maths paper style pattern of rectangles stretching from skirting board to ceiling. We use some of these, the ones opposite the kitchen door, to store mugs, plates, bowls and glasses. But most are empty, although having not looked in all of them I have no idea what some of them may contain. This wall houses doorway to the living room, Charlie’s roman as it turns left at the end, the front door. On the front door handle, just peeking out behind the left wall, a sticker of that looks to be the Andrex dog stares at me.